Usher de Grey is a character in the fourth book. He is a villain with the powerful endowment in creating a force field. The force field he could create was stronger than iron, preventing anyone to pass it. He and his wife Florence de Grey adopted Billy Raven when the Bloors asked them to. They live in the Passing House, in Crook’s Passage, further down Hangman’s Way into an alley. Usher has thinning hair and "finds it very hard to smile". A cat named Clawdia lives in the Passing House. 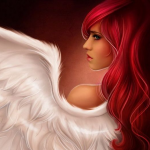