"They think you'll go astray, like Lyell did." --Amy Jones

Charles "Charlie" Bone (b. early January 1992) is the protagonist of the Charlie Bone series. He is the son of Lyell and Amy Bone, grand-nephew of Paton Yewbeam, Venetia Yewbeam, Eustacia Yewbeam, and Lucretia Yewbeam, and grandson of Grizelda Bone and Maisie Jones. Charlie can travel into photos and paintings, and is the owner of the wand Claerwen.

Charlie lived in Diamond Corner for the first two years of his life, but moved to 9 Filbert Street with his mother after his father disappeared. At the age of five he became friends with Benjamin Brown who lived across the road. The Yewbeams kept an eye on him in case he was endowed.

When Charlie comes home from school one day he is given what he thought was a photo of Runner Bean, which he plans to make a card out of for his best friend, Benjamin Brown, but was instead a picture of a sombre old man holding a baby. This is the first time that Charlie's endowment manifests itself and he hears the voices of the people within the photograph. He asks his family if they had hear the voices and they dismiss it while Grandma Bone encourages it. To ease his mother's mind, he assures her that he only pretended to hear the people in the photo to trick Grandma Bone.

Soon after, he goes for a walk with Benjamin and Runner Bean, and again begins to hear the voices when he sees a picture of Manfred Bloor in a newspaper article. Now he is forced to admit that he is not imagining things like he thought he was. Later that night the Yewbeam sisters come to test Charlie, and trick him into revealing his endowment. After confirming that Charlie is gifted, Grandma Bone and her three sisters insist that he transfer over to Bloor's Academy, so they can control him and his endowment. Though Charlie doesn't want to go, his mother and Maisie tell him that he must, or they will be kicked out onto the streets. Also that night, Charlie makes his mother tell him again about how his father died, and his mother surprisingly reveals the truth behind her and Lyell's marriage and why there are no pictures of him in the house. At midnight, Charlie wakes up to find Paton leaving the house, and follows him. Charlie sees for the first time Paton's endowment at work. After Paton acknowledges his presence the two talk, and Charlie learns something about his uncle's history and his endowment.

The next day, Charlie meets Orvil Onimous and the Flames for the first time, when they come to Filbert Street under the pretence of being 'pest-control'. Orvil sees the photo of the man and the baby, and tells Charlie that he should find out where the person who wanted the photograph lives, so that he can swap photos with him or her. Charlie does so. He hears from Miss Ingledew the story of Emma Tolly's abduction and she gives him a metal suitcase and a metal dog, both inventions of Dr Tolly. Charlie leaves the bookshop with them and hides them in Benjamin's house.

He is placed in the Music Department, despite having no musical talent, and Fidelio Gunn is brought in to help him learn how to play the piano. When he starts at Bloor's Academy, Charlie also befriends Olivia Vertigo.

Charlie's first day doesn't go very well, as he finds his cape switched with a ratty one. Though Fidelio warns him that he'll get into trouble if he doesn't wear it, Charlie refuses to, and as a result gets detention, meaning that he has to stay at school for one more day. Later, Fidelio tells him that Gabriel Silk is most likely the one who stole his cape, and suggests that he switch capes with the boy again while in the dormitory. Charlie attempts to do this, but Gabriel wakes up and begs him not to, because he can't wear the ratty cape due to his endowment. Feeling sorry for him, Charlie agrees, and lets Gabriel keep his new cape. However, partly in return for this, Charlie asks Gabriel to wear Lyell's tie and see what happened to him. Gabriel does so, and tells Charlie that Lyell isn't dead as was previously believed; merely lost.

Friday comes, and Charlie stays behind to do his detention. Olivia also has detention, and Billy never goes home, so Charlie isn't alone in the Academy. During their hours of free time Olivia insists on them going exploring in an abandoned old art tower, and the trio stumbled upon a room full of inventions. When Manfred and Dr. Bloor come into the room the trio hides in a closet full of skeletons, and overhear an interesting conversation which gives some clues about the mystery surrounding Emma Tolly and Mr. Pilgrim.

On Saturday, Charlie, with Olivia's help, goes up the Music Tower at 11:30 a.m. to meet up with Benjamin and Fidelio. Afterward, as he hears footsteps below him, he goes up to the top of the Music Tower, and meets Mr. Pilgrim properly for the first time.

Throughout the book, Charlie and his friends slowly unravel the mystery revolving around Emila Moon (Emma Tolly), Billy Raven, Manfred Bloor, and the Bloors. They find out that she is hypnotized, what happened to her father, and use the Tolly Twelve Bells to break Manfred's hypnotism.

Near the end of the book, when going through the ruins of the Red King's castle, Charlie's cape suddenly starts to glow. He realizes that it was bewitched by his family and what they were trying to do before he tries to find an exit, knowing that The Beast is coming after him. It is only through the intervention on Tancred, Lysander, and Gabriel's behalf that Charlie's life is saved before he is taken back to Bloor's.

Charlie Bone and the Time Twister

On the first day back at Bloor's, Charlie is hoping for a rather uneventful term after what happened during the ruin game in November. However, this is not to be, as he meets his long-lost great-great uncle Henry Yewbeam and is forced to help him hide from Ezekiel Bloor, who wants to do something horrible to him.

During the course of these events, Charlie befriends Cook and visits her secret underground rooms, and also acquires a wand after venturing into Skarpo's painting that he uses to move the rock that traps Henry in his prison in the Red King's ruin.

After Henry arrives in 9 Filbert Street with Emma Tolly's help, Charlie and Paton take him to live with his brother James Yewbeam, who is now elderly. Henry tells Charlie that Mrs Bloor told him that she knows where his father is. However, to Charlie's disappointment she disappeared before she could tell Henry where Lyell is hidden.

Charlie Bone and the Blue Boa

During this term at Bloor's, Charlie gets involved with rescuing a boy named Ollie Sparks, who was made invisible by a magical snake (the Blue Boa) and imprisoned in the attics by the Bloors.

Charlie Bone and the Castle of Mirrors

On the first day of autumn term, Charlie returns to Bloor's as a second-year student.

Charlie Bone and the Hidden King

In Charlie Bone and the Hidden King, it is revealed that Charlie's father is Mr. Pilgrim, the piano teacher at Bloor's, who has been hypnotized since attempting to stop the hypnotization of Emma Tolly.

Charlie Bone and the Wilderness Wolf

Charlie Bone and the Shadow of Badlock

Charlie Bone and the Red Knight

Charlie narrates the prologue of the book, giving background on the story. It's revealed that he and Lyell spent two weeks in the summer after book 8 holidaying in Africa, following the young Red King's footsteps. They found the caves Bartholomew Bloor spoke of and Charlie was able to use the cave drawings to visit the Red King. According to Charlie, 'when I touched them, I met the boy who made them. And every time we met, the King's voice became clearer and his face brighter, until it seemed as if I was just talking to a friend who was sitting beside me'. Little by little the Red King told Charlie his story, and with Gabriel's help Charlie and Paton learned about the Red King's cloak, where it came from and how it helped the Red King become a magician.

Charlie appears at several points over the course of Timoken's journey through Africa and into Europe. The two boys become good friends. Though Timoken asks him, Charlie refuses to tell him about the future.

Petrello witnesses one of Charlie's secret visits in the Red Castle, and is given a chance to meet him. Charlie comments that Petrello is very like Tancred, before leaving suddenly.

Henry and the Guardians of the Lost

Charlie appears at the end of the novel with Pearl when Henry and Ankaret arrive in the field near Ocean View. He welcomes Henry back, and Henry introduces him to Ankaret. He asks about the carriage that brought the two lost children home; Henry tells him that it came from the forest.

Paternally, Charlie Bone is descended from the Red King's youngest daughter, Amoret, and his eldest son, Borlath, while, maternally, Charlie descends from a Welsh Magician named Mathowy . As such, Charlie has gained endowments from both sides of his family.

Charlie's endowment picture-travelling. With this abilitiy, Charlie can hear the voices of people inside photographs or paintings as well as enter them. It was through this ability that Charlie stole a wand from Skarpo's painting and also accidentally released that wizard into the present day.

Paton gave Charlie a Welsh Dictonary so that he could learn how to operate the wand as it only followed welsh commands. It was through this that Charlie was able to save Emma Tolly's aunt Julia Ingledew from a bewitched belt which, otherwise, may have killed her.

After Manfred Bloor attempted to burn Charlie's wand when it didn't work for him, the wand transformed into a white moth that Charlie named Claerwen (Clear Light).

Charlie has a strong relationship with his great uncle, oft turning to him for advice. Paton has assisted Charlie many times throughout the series.

Charlie loves his mother a lot and cares about her.

Benjamin and Charlie have been good friends since age five and generally have a good relationship throughout the series.

Henry Yewbeam is Charlie's long lost relative who disappeared in 1916. The two meet after Henry is sent through time through the Time Twister, and they become good friends. Although Henry is Charlie's great-great uncle, the two boys simply refer to each other as cousins.

Matilda is the kind grand-daughter of Count Harken Badlock. Charlie first meets her when he travels through the painting of Badlock to rescue Billy Raven, and he develops feelings for her which she reciprocates. However, she refuses to return to the 21st century with him when he later returns to Badlock rescue Billy, as she believes that it is her destiny to journey to Italy and marry an Italian prince. 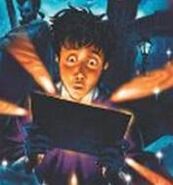 In the first book